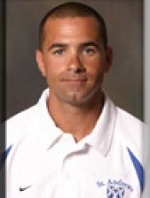 Stevan Hernandez enters his thirteenth season as a head coach in the St. Andrews athletics department. Hernandez returns to the helm of the men's soccer program for the third consecutive year after spending the 2009-2010 academic year as the Director of the Annual fund for St. Andrews.

In 2006, Hernandez led the St. Andrews men's soccer team to its best season in the college's NCAA Division II era with a 13-6-3 overall record and a fourth place finish in the CVAC with a 6-3-1 ledger. The Knights made a run to the conference tournament championship game and were ranked nationally in D-II as one of the top-10 most improved teams.

Hernandez joined the Knight athletic staff in the summer of 1998. He began his tenure as head softball coach in the spring of 1999 and assumed the responsibilities of coaching the re-instated women's soccer program in the fall of that same year. Hernandez coached the women's soccer program for five years and led the Knights to their first CVAC playoff birth in 2003. Hernandez moved from the women's team to the men's in February of 2004.

Hernandez earned a Bachelor of Science in recreation administration from Wingate University in 1997 and completed his masters' degree in Physical Education at UNC Pembroke in 2008. Hernandez holds his Advanced National Diploma from the NSCAA.